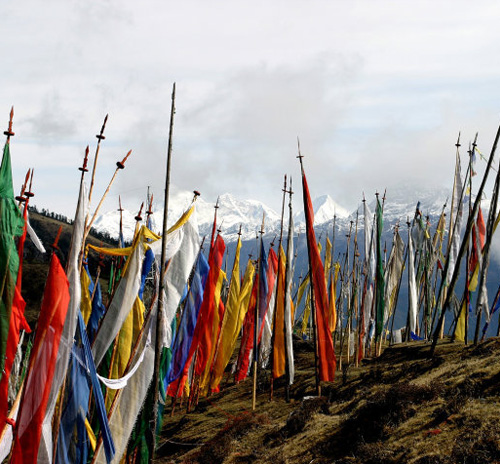 The Royal Insurance Corporation of Bhutan (RICB) has initiated a travel and a medical scheme solely for our visitors. If you wish to apply for one, Window to Bhutan shall get detailed information about the insurance scheme. You may also visit the RICB website at www.ricb.com.bt

Bhutan’s currency is the ngultrum (Nu.) and is on par with the Indian Rupee, also an accepted legal tender in the country. The approximate exchange rate is Nu 60 for 1 US$. It is however recommended that you carry travelers’ checks or cash, preferably American Express and US dollar instead, as the ATM facilities for foreign currency is limited to just few towns including the capital city Thimphu. Visa and American Express credit cards are also widely accepted. You may change dollars, Euros, traveler’s checks, and a few other convertible currencies at banks and bigger hotels in all major towns. A Forex is also located in the heart of Thimphu.

There are a number of banks in Bhutan that cater to the needs of the people. Some of the banks that you can avail services and facilities while in Bhutan are the Bank of Bhutan Limited, the Bhutan National Bank, the Druk PNB and the Tashi Bank. All the banks provide SMS and internet banking facilities. There are also ATM facilities available, and ATMs are located in a number of places where you can withdraw your money especially in Thimphu and in the border town of Phuentsholing. Traveler’s check can be easily withdrawn and exchanged into local currency. However, as you travel into the interior, ATM and internet facilities are almost non-existent and we suggest that you do your banking facilities while in Thimphu.

Bhutan’s national language is Dzongkha. It has Tibeto-Burman roots. However, since English is the medium of instruction in schools, the language is widely spoken in most parts of the country. Bhutanese are polyglots; a person can fluently speak more than one language. And there are more than 18 dialects spoken in various pockets of the country. Our guides speak fluent English.

Buddhism
It is possible to receive instruction on Buddhist practice at any monastery, though for discussions on Buddhist philosophy it is better to consult with teachers at Buddhist colleges such as Lhodrak Kharchhu Monastery in Jakar, Tango Monastery near Thimphu, or Chokyi Gyatso Institute in Samdrup Jongkhar.

Shopping & credit cards
The most popular tourist purchases include traditional Bhutanese arts and handicrafts, Buddhist paintings (thangka), textiles, and wood carvings. Bhutanese hand-woven textile is prized around the world. You can buy them in most handicraft boutiques. Yathra is another brightly colored woven material made from wool and dyed with natural colors. It is sold in pieces or sewn into jackets, bags, rugs and wall hangings. Wood and bamboo products include dappa (handmade wooden bowls) and bangchung (small bamboo woven baskets) with two tightly fitting halves.

Credit cards (MasterCard, Visa & American Express) are accepted only by a handful of shops and hotels in bigger towns. Therefore, we suggest you carry sufficient traveler’s checks and cash. Please remember that buying and selling of antiques is strictly forbidden in Bhutan.

A typically Bhutanese staple is rice, ema datsi (chili and cheese curry), and suja (butter tea). So, expect this fare, should you visit or stay in a farmhouse. Most hotels also serve Indian, Chinese, and Continental dishes. You can also try out momos, the Tibetan dumplings.
Although star-rated recently, the standard of accommodation in most tourist hotels, lodges, and guesthouses, remains relatively basic. The more frequented districts in western parts of the country generally offer better standards of accommodation than the less frequented eastern and southern parts. However, since all the hotels are approved by the Tourism Council of Bhutan, you can expect at least a decent standard.

We can also arrange farmhouses with the most basic of amenities where you will be able to experience the typical Bhutanese lifestyle. Bhutan’s famed hot stone bath can be arranged in a farmhouse.

Main health risks include diarrhea and respiratory problems because of the change in climate and seasons. For some, altitude change could also cause minor palpitations, shortness of breath or headaches, especially if on a trek. You are advised not to drink water from indiscriminate sources.

However, hospitals and clinics are located in almost every part of the country, even in the remotest areas. Indigenous medical facilities are also located in all district capitals.

The World Health Organization recommends the following vaccinations for travelers to Bhutan: Adult Diphtheria and Tetanus, Hepatitis A & B, Polio, Typhoid, Cholera, Rubella, Japanese B Encephalitis, and Rabies.
You might also want to carry a little first aid kit of the following important medicines: antifungal and antibacterial cream, antibiotic for skin infections, indigestion medication, laxative, paracetamol, sunscreen, and throat lozenges.

The only mode of transportation within Bhutan is by motor vehicles. There is no domestic air service yet. And trains are not feasible given the mountainous terrain. However, domestic air travel will be possible starting January 2012.

The national lateral highway runs from west to east covering some 550 kilometers. Roads have reached all major towns and villages in the country. However, during monsoons, roads may be blocked by landslides and flash floods, disrupting travel.

All district headquarters and major towns have communication facilities like Internet Cafes, Post Offices, and Telephone Kiosks with international dialing facilities. You can send home beautiful post cards from all corners of Bhutan.

Most of Bhutan has mobile phone coverage, and as B-Mobile has agreements with some Asian and European countries on mobile roaming, cellular phones from these countries can be operated in Bhutan.

Time
Bhutan Standard Time is 6 hours ahead of GMT and there is only one time zone throughout the country.

Office Hours
Office hours in Bhutan are divided into two timings – the summer timing and the winter timing. The summer timing begins at 9 am Bhutan Standard Time and goes on till 5 pm in the evening. The summer timing is followed from March till the end of October. The winter timing that lasts for the months of November till the end of February begins at 9 am in the morning till 4 pm in the evening. However, these timings are followed only in Thimphu and few other districts. These timings are followed only by the civil servants. For those employed in corporations and the private sector, the timings are usually from 9 am till 5 pm irrespective of the season.

Smoking
Buying and selling of tobacco products is banned in Bhutan. It is prohibited to smoke in public places. It is also sacrilegious to smoke near temples and any other religious sites.

Safety
Bhutan remains one of the safest countries in the world. However, we advise you not to venture out after 9 pm. If you really need to go out, be sure you are accompanied by a guide. Always ensure that your belongings, especially your passports, route permits, cameras, wallets and purses are secured. There have been stray incidents of theft in the past.

Electricity
All major towns are well connected with electricity that runs on 220/240 volts with round hole two-pin and three-pin power outlets.

Clothing
Given Bhutan’s varied climate and seasons, you are advised to carry a variety of clothes. Make sure you bring a hardy pair of boots and a rain gear. We recommend warm clothes in the evenings and mornings. When visiting temples, remove shoes and head gear and wear clothing that expresses respect for the sacred nature of the site. You will need to wear pants and long shirts for a little formality.

Weights and measures
Bhutan has a standard system of weights and measurements in place and most weights are measured in gram (g) and kilogram (kg). With better and efficient measurement systems readily available, most shopkeepers in the capital city make use of electronic weighing scale. However, as you travel further east, you will find the ordinary weighing scale being used.

Climate
Bhutan experiences four distinct seasons, similar in their divisions to those of Western Europe: spring, monsoon, autumn, and winter. Most tourist visit Bhutan in spring and autumn.

Spring is the time when Bhutan’s rich flora is at its best as hundreds of varieties of flowers bloom. And during this time around, the skies are clear and you can see towering snow-covered mountains of the Himalayas.
Even in spring Bhutan’s fierce winter, especially in high altitudes, isn’t over. Tourists who intend to visit during this time are advised to bring along some winter clothes. Spring season starts from March and ends roughly in June.

Another good time of the year – autumn – begins from September and lasts till the end of November.
Monsoon brings heavy downpours and occurs between June and August when the temperature is normally between 8° and 21°C (46°-70°F).
Winter in Bhutan is cold and dry with most high lying places snow-covered. Winter lasts from December to February.
Summer is humid and the country experiences heavy rains and frequent road blocks.

However, Bhutan’s climatic conditions are different at different places and locations because of country’s geography. Some places in Bhutan are as low as 100m, while others are more than 7,000m above sea level. The mountains in the north of Bhutan on the borders with Tibet are perennially covered with snow.
Bhutan has three different climatic zones: subtropical in the south, temperate in the central region, and alpine in the north.